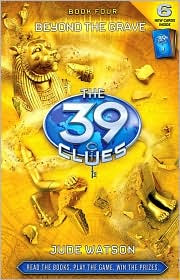 If Amy Cahill had to list what was wrong with eleven-year-old brothers, their habit of disappearing would be numero uno.
Or maybe the fact that they existed in the first place.
And then there was the whole burping the alphabet thing...

The search for the 39 clues has taken this loosely-supervised brother-sister team to Egypt. How much trouble can Dan and Amy get into while exploring tombs, shops, and museums? Quite a bit as you might guess.

Beyond the Grave has a good bit of substance--much more than I was expecting. Dan and Amy explore their feelings about their grandmother Grace's death. They talk about her. They talk about what she meant to them. About the memories. About the legacies. I know an adventure book that explores emotions! I wasn't expecting that either. But I must say I liked seeing the human side of the team.

There is plenty of action and adventure within this fourth adventure.

The first three: The Maze of Bones, One False Note, The Sword Thief.

© Becky Laney of Young Readers
Posted by Becky at 10:40 AM