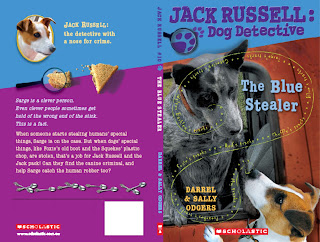 The Blue Stealer is the ninth book in the Dog Detective series by Darrel and Sally Odgers. And it introduces a few big changes. We learn that Sarge is getting married, for example. Sarge is Jack's human. (And there's a bit of a teaser in the ending. It sure left me wanting more!) There are several mysteries to solve in this one. There's both a human thief and a dog thief in town. And Jack and Sarge are on the case. Jack is trying to solve the case of who is stealing all of his friend's toys/belongings. (Foxie's boot, for example).

One thing that I learned in my investigating was that this book is in fact the TENTH book in the series. These books were originally published in Australia. The American publishers are Kane/Miller. Apparently, the *true* ninth book is called FOWL PLAY. Here's how the ninth book is described on the authors' website:

In this story, Auntie Tidge and lots of her friends join a Poultry Club. Suddenly, Doggeroo is more like Chookaroo. When someone starts making the chooks have hen-sterics, Red gets the blame... meanwhile, Ralf Boxer is under attack from a ruthless rooster. Sarge is acting strangely, too... To find out how we solved the mysteries, get your paws on a copy of the book.

I would love to know why Kane/Miller didn't publish Fowl Play. It makes me curious as to what I missed by them skipping this one. Some of the changes in this book seem a bit sudden to me, and I think the missing book holds the clue.

© Becky Laney of Young Readers
Posted by Becky at 9:52 AM