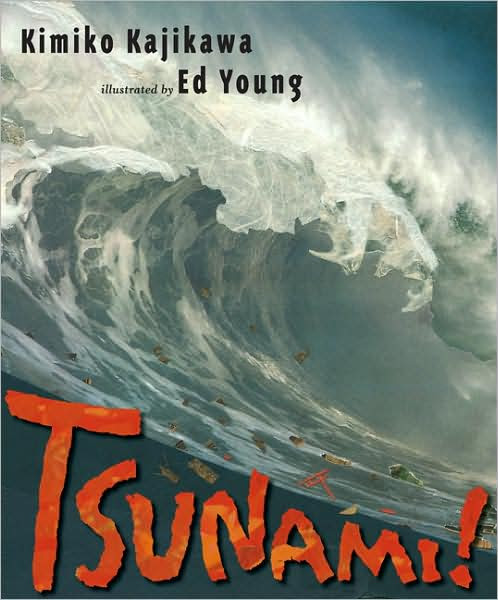 Kajikawa, Kimiko. 2009. Tsunami! Illustrated by Ed Young. Penguin.
I really enjoyed this one. It's a strikingly illustrated picture book of a folk tale.

Long ago in Japan, there was a wise old rice farmer who lived near the sea. The people in the village called him Ojiisan, which means "grandfather." Even though Ojiisan was the wealthiest person in the village, he lived a very simple life. His thatched cottage stood high on the mountain, overlooking the village and the sea. People often climbed the long zigzag road up the mountain to ask Ojiisan's advice.

Tsunami is the story of how one man through great cost to himself saved the village from an approaching tsunami. Though the village was destroyed, the villagers were saved due to the quick-thinking of a wise old man.

Ojiisan turned his keen old eyes anxiously toward the sea. It had darkened suddenly and was moving against the wind. THE SEA WAS RUNNING AWAY FROM THE LAND! The beach grew before Ojiisan's eyes. He had never seen anything like this, but he remembered what his grandfather had told him when he was a child. Ojiisan shivered. "Tsunami--the monster wave," he whispered. But none of the villagers realized the danger they were in. Ojiisan watched as the whole village ran to the beach, and even beyond the beach, to watch the sea.

How can one man save a village? What must he do to get their attention? Read and see for yourself in Tsunami!
© Becky Laney of Young Readers
Posted by Becky at 1:08 PM