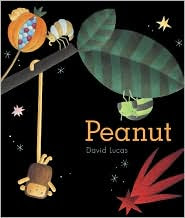 In the night,
on a tree,
a flower grew.

As the sun rose,
the flower opened.

Inside was a monkey, a monkey as big as a pea.
In the warm sun, he soon turned golden brown
and grew as big as a nut.

Peanut is the story of a small monkey--named Peanut, as you might have guessed. The world is a little overwhelming for Peanut. He's not sure how the world works exactly. He is less than a day old after all. It's only natural that wind and rain might worry him a bit. Peanut is a timid and curious little monkey that's for sure!

Did I like the story? It was cute enough in a way. But I'm not sure I'd consider it a must-read by any means. It's more than a little silly. It's a lot silly. And it's fun. I'd be curious to see how kids respond to Peanut.

© Becky Laney of Young Readers
Posted by Becky at 12:56 PM