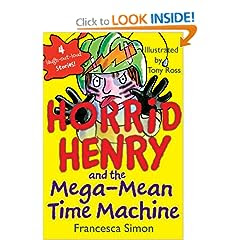 Simon, Francesca. 2009. Horrid Henry and the Mega-Mean Time Machine. (Originally published in the UK in 2005).

Out of the four Horrid Henry titles I've read so far, this may just be my favorite and my best. There is something about Horrid Henry--the character--that I just love. True, he's a bit horrid--has a mean streak and a good dose of stubborness--but he's just so darn lovable!

Horrid Henry has a brother, Perfect Peter, and in the story Horrid Henry and the Mega-Mean Time Machine, Horrid Henry pulls off the perfect prank for his perfectly gullible younger brother. A prank involving among other things a cardboard box. It's funny. But Perfect Peter tries--and a bit imperfectly at that--to get his revenge in the follow-up story!

Through it all, I just enjoyed myself. I think this is a great series of chapter books for kids.

© Becky Laney of Young Readers
Posted by Becky at 4:49 PM