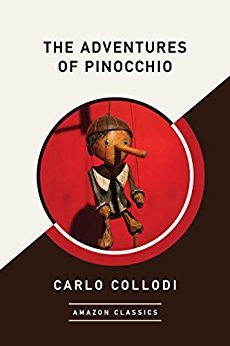 First sentence: Centuries ago there lived-- "A king!" my little readers will say immediately. No, children, you are mistaken. Once upon a time there was a piece of wood. It was not an expensive piece of wood.

Premise/plot: Pinocchio, as a character, is rotten from the start: selfish, pleasure-loving, foolish, rebellious, ungrateful, disrespectful, slow to learn, slow to listen, slow to change. Living by the motto of if I want to do it, it must be right! Who are you to tell me it's wrong or it's a mistake or I'm hurting someone else!

But Pinocchio doesn't know best, he doesn't "know" much of anything of the world and its many dangers. He knows nothing about consequences natural or supernatural. (There are so many fantasy elements in Pinocchio.)

The Disney movie gives viewers essentially three misadventures (the puppet show ("I've Got No Strings), his running away to toy land (becoming a donkey), and searching for his father and getting swallowed up. The book gives readers about three or four dozen misadventures.

My thoughts: This is the third time I've read Pinocchio. I wanted to read it after recently watching the Disney movie for the first time in forever--probably twenty or twenty-five years.

The movie left me with the impression that I am GLAD that God is not like the blue fairy. That while the movie is very moralistic and lesson-driven, it's teaching works-righteousness. In other words, bad behavior is punished and good behavior is rewarded. If you want to become a real boy--you'll have to earn it by works of righteousness. You reap what you sow.

The movie also gives the impression that temptations come from without. Pinocchio was innocent and naive while in the home. It wasn't until he left his home--to go to school--that he faced temptation and wasn't strong enough to say no. If he'd been homeschooled and never left the safety of his home, would he have ever been naughty? Disney doesn't answer that, of course. But it made me wonder just how short a movie it could have been.

In the book, temptations don't only come from without. In fact, they come from within. (In other words, we sin because we're sinners.) We see this in his creation:

After choosing the name for his Marionette, Geppetto set seriously to work to make the hair, the forehead, the eyes. Fancy his surprise when he noticed that these eyes moved and then stared fixedly at him. Geppetto, seeing this, felt insulted and said in a grieved tone: "Ugly wooden eyes, why do you stare so?"
After the eyes, Geppetto made the nose, which began to stretch as soon as finished. It stretched and stretched and stretched till it became so long, it seemed endless. Poor Geppetto kept cutting it and cutting it, but the more he cut, the longer grew that impertinent nose. In despair he let it alone. Next he made the mouth. "Stop laughing!" said Geppetto angrily; but he might as well have spoken to the wall. "Stop laughing, I say!" he roared in a voice of thunder. The mouth stopped laughing, but it stuck out a long tongue.  "Pinocchio, you wicked boy!" he cried out. "You are not yet finished, and you start out by being impudent to your poor old father. Very bad, my son, very bad!" And he wiped away a tear. The legs and feet still had to be made.
As soon as they were done, Geppetto felt a sharp kick on the tip of his nose. "I deserve it!" he said to himself.
When his legs were limbered up, Pinocchio started walking by himself and ran all around the room. He came to the open door, and with one leap he was out into the street. Away he flew!

Pinocchio wasn't corrupted by bad companions and poor decisions. He was "born" naughty.

While there is a friendly cricket offering advice, Pinocchio KILLS HIM fairly soon after his introduction in the text. He doesn't even survive one page!

"Tell me, Cricket, who are you?" "I am the Talking Cricket and I have been living in this room for more than one hundred years." "Today, however, this room is mine," said the Marionette, "and if you wish to do me a favor, get out now, and don't turn around even once." "Woe to boys who refuse to obey their parents and run away from home! They will never be happy in this world, and when they are older they will be very sorry for it." "Sing on, Cricket mine, as you please. What I know is, that tomorrow, at dawn, I leave this place forever. If I stay here the same thing will happen to me which happens to all other boys and girls. They are sent to school, and whether they want to or not, they must study. As for me, let me tell you, I hate to study! It's much more fun, I think, to chase after butterflies, climb trees, and steal birds' nests."
"Poor little silly! Don't you know that if you go on like that, you will grow into a perfect donkey and that you'll be the laughingstock of everyone?" "Keep still, you ugly Cricket!" cried Pinocchio. But the Cricket, who was a wise old philosopher, instead of being offended at Pinocchio's impudence, continued in the same tone: "If you do not like going to school, why don't you at least learn a trade, so that you can earn an honest living?"
"That of eating, drinking, sleeping, playing, and wandering around from morning till night."
"Let me tell you, for your own good, Pinocchio," said the Talking Cricket in his calm voice, "that those who follow that trade always end up in the hospital or in prison." "Careful, ugly Cricket! If you make me angry, you'll be sorry!" "Poor Pinocchio, I am sorry for you." "Why?" "Because you are a Marionette and, what is much worse, you have a wooden head." Perhaps he did not think he would strike it. But, sad to relate, my dear children, he did hit the Cricket, straight on its head. With a last weak "cri-cri-cri" the poor Cricket fell from the wall, dead!

Pinocchio's greatest gift--if you don't count disobedience or willfulness as gifts--is making excuses and justifying his behavior and beliefs. And also, of course, LYING.

"Boys always promise that when they want something," said Geppetto. "I promise to go to school every day, to study, and to succeed--" "Boys always sing that song when they want their own will." "But I am not like other boys! I am better than all of them and I always tell the truth. I promise you, Father, that I'll learn a trade, and I'll be the comfort and staff of your old age."

VeggieTales offers a better adaptation called Pistachio: The Little Boy that Woodn't. It isn't 100% faithful to the book, mind you. But it is definitely more faithful to the book than the Disney movie. It also does a better job of putting the morals and lessons into context. It is complemented by the PARABLE OF THE PRODIGAL SON and highlights unconditional love. It also has some great lines in it!