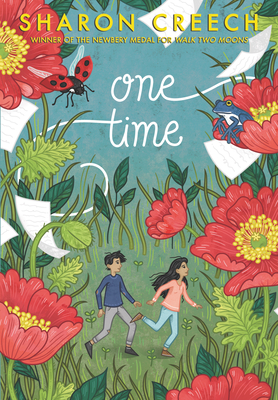 First sentence: Dear Miss Lightstone: I am Gina Filomena, age eleven. Sometimes teachers think I am not paying attention, but what they mean is that I am not paying attention to them. I pay attention to lots of other things like what is happening outside the windows, and the noises in the room, like the humming and the tapping and the snapping and the sniffling, and all the smells—some good, some bad. But I will try to pay attention to you. I will try. Your student, Gina F. When the new teacher asked us to write something about ourselves, that’s what I wrote. I did not write about the angels or the boy with the visions. No need to scare her.

Premise/plot: Gina stars in Sharon Creech's newest coming of age novel for middle schoolers. Readers get to know Gina, her family, her neighbors, her classmates, and one very special teacher. Though she's struggled with making friends and feeling like she belongs--especially in a school setting--she's in for a remarkable, unforgettable year.

It particularly celebrates the joys of reading, writing, imagining, and living.

My thoughts: I enjoyed this one. I've read some of the more critical reviews of One Time, and the general idea for those that don't like it seems to be that it lacks plot and nothing actually happens. I can't disagree that this one focuses more on internal journeys--thoughts, feelings, emotions, being--as opposed to external ones. There might not be much doing in terms of action. A girl goes to school day after day, week after week, month  after month, and by the end of the year knows more about who she is...end of story. The story also touches here and there with the notion of bullying and acceptance.

I think it worked for me--keep in mind I'm reading as an adult--because the focus was on books and characters who love to read and subsequently learn to love to write.


At first I did not know what to make of her. She did not begin with rules. Instead she asked us to help her sort books, and in the middle of that, she stopped to read the beginning of one. “Oh, this one is a favorite,” she said. “I’ll just read the first page.” Her voice took on a different tone, one that we would soon recognize as her reading voice—a fluid, resonant, rich tone. When she stopped, the room was silent. She looked up from the page. “What? You want more? Maybe later.”
While we sorted and stacked books that morning, she frequently stopped to read from another “favorite”—sometimes it was a poem, sometimes a chilling opening paragraph, sometimes a humorous passage. I was hypnotized. I’d only ever heard my parents read aloud to me, and it had been a few years since they had done so. My mother read so rapidly that my brain was always a few paragraphs behind. My father was blessed with many virtues, but reading aloud was not one of them, for he stumbled over long words and used the same voice for every character. But Miss Lightstone was a master. By the end of the first week, she had us in the palm of her hand. Well, most of us.

It was surprising how one sentence—the first sentence—of a book had the power to draw you in or push you back, but not everyone was drawn in or pushed back by the same sentence. We discovered this when we each read aloud our favorite openers.