57. Peter Nimble and His Fantastic Eyes 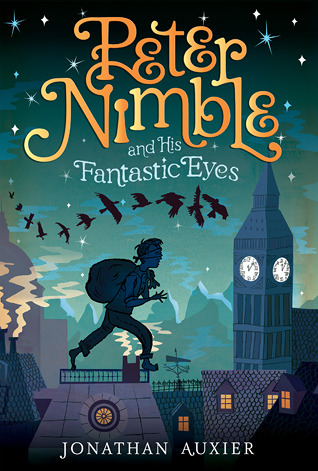 First sentence: Now, for those of you who know anything about blind children, you are aware that they make the very best thieves. As you can well imagine, blind children have incredible senses of smell, and they can tell what lies behind a locked door--be it fine cloth, gold, or peanut brittle--at fifty paces. Moreover their fingers are small enough to slip right through keyholes, and their eyes keen enough to detect the faintest clicks and clacks of every moving part inside even the most complicated lock. Of course, the age of great thievery has long since passed; today there are few child-thieves left, blind or otherwise. At one time, however, the world was simply thick with them. This is the story of the greatest thief who ever lived. His name, as you've probably guessed, is Peter Nimble.

Did I enjoy reading Peter Nimble and His Fantastic Eyes? Yes. Definitely. Am I excited that there will be another book in the series, Sophie Quire and the Last Storyguard? Yes. I look forward to reading it. And it appears to have a heroine, and be at least partly set in a bookshop. So, I'll definitely read it when it's released. But did I LOVE, LOVE, LOVE Peter Nimble and His Fantastic Eyes in the same way that I LOVED, LOVED, LOVED The Night Gardener?! Not really. The Night Gardener is probably--not counting rereads--my favorite book of 2014.

Who is Peter Nimble? Who are his parents? Where did he come from? What does Peter know about his past--if anything? What do readers know about his past? Yes, he's an orphan who raised himself on the streets. Yes, he's a thief by necessity and manipulation. (Peter "being taken care of" by Mr. Seamus.) But is he destined for more than that? What does his future hold for him?

I liked Peter Nimble and His Fantastic Eyes because it is a fantasy, a grand old-fashioned fantasy. The concept of his "fantastic eyes" is just intriguing. Pairs of magical "eyes" that he can put in and take out that do unusual, fantastic things--though not without risk and danger! And the adventure he lands in and the people he meets...it's just a compelling story, one that's easy to recommend.