123. The Nutcracker of Nuremberg 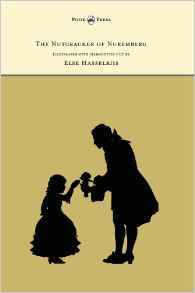 First sentence:  In the city of Nuremberg lived a much respected Chief Justice called President Silberhaus, which means "house of silver." He had two children, a nine-year-old boy, Fritz, and a daughter Marie who was seven and a half years old.

Premise/plot: Marie and Fritz receive a Nutcracker--to share--from Godfather Drosselmayer one Christmas. When the Nutcracker is injured--due to her brother's reckless play--Marie cares for him. She places him tenderly in a doll bed, and is so worried that she watches over him long past bedtime. What follows is either a very vivid dream--well, many, many, many dreams--or an incredible fantasy adventure involving the Nutcracker, vengeful mice, and one very wicked Mouse King. The story occurs over several weeks--not one night--and there is a story within a story. The inner story is extremely bizarre! It gives this Nutcracker a potential back story that will fascinate and captivate the young Marie. Is it true? Is it a fairy tale?

My thoughts: The book opens with a preface, an excuse for the retelling. The author had taken his daughter to a birthday party. During the party, he made his escape and fell asleep in one of the rooms of the house. The children find him asleep and tie him up. To secure his release, he offers several bribes. The first--for candy--is rejected, as is the second--for fireworks in the park. But the third, well, the third is accepted. The children demand a fairy story. He warns that the story he's about to tell is not his own, not of his own making. But they don't care about originality. They want a GOOD, entertaining story.

In three parts, the tale of the Nutcracker is related to his young audience--who had already freed him. The first part introduces readers to Marie and her family. It is Christmas, of course, and she's taken a special interest in a Nutcracker. Her brother took an interest as well which led to the Nutcracker getting broken. Marie takes on the role of nurse, and this role continues even after the rest of the family has gone to bed. She remains behind in the living room (or equivalent) and reality becomes a bit blurred in what follows. It involves the Nutcracker and the rest of the toys coming to life and doing battle with mice led by a Mouse King. What readers learn is that somehow, someway, Marie gets injured--her hand, I believe--by broken glass. Marie remains in bed recuperating for the second and third parts of the story. Her godfather visits her and tells her the story of "The Nut Krakatuk and the Princess Pirlipate." This is a dark fairy tale of a king, queen, and princess cursed by mice seeking revenge, and, of what was done to try to break the curse. The third part of the story focuses once more on Marie, the Nutcracker, and the Mouse King. Several threats are made against the Nutcracker to Marie by the Mouse King, and several times she tries to appease him. For example, she gives in to his demand for all her candy, for all her dolls, etc. But it is inevitable: The Mouse King must do battle once and for all with the Nutcracker, and Marie, I believe, does find a sword for The Nutcracker. After the battle, the Nutcracker takes Marie away with him to a fantasy land where just about anything is possible....