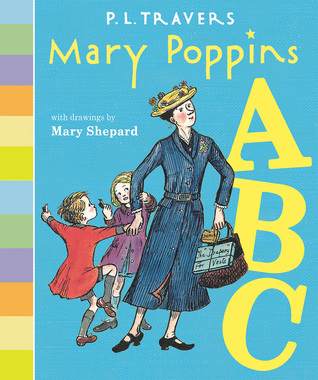 First sentence: A is for Anxious Andrew, Mrs. Lark's dog, who loves Almonds and Apple pie.
B is for Admiral Boom in his Blue coat, feeding the Birds with the Bird Woman.
C is for Mary Poppins' Carpet bag and eating Cherries, but Chew Carefully so the Cherry pits don't Crack your teeth!
D is for a Disastrous Dinner, but the roast Duck, Dumplings, and Dates for Dessert are Delicious!

Premise/plot: Mary Poppins ABC has been newly reprinted in a board book format. Or soon will be. It releases in June 2018.

My thoughts: This one is for for fans of Mary Poppins. In particular fans of the book series. It was originally published BEFORE the Disney movie was released in 1964. The books and the movie are quite different--delightfully different. The new movie will release in December. There is still plenty of time to read the books before it is released. (HMH has released four of the books in the series: Mary Poppins, Mary Poppins Comes Back, Mary Poppins Opens the Door, and Mary Poppins in the Park.)