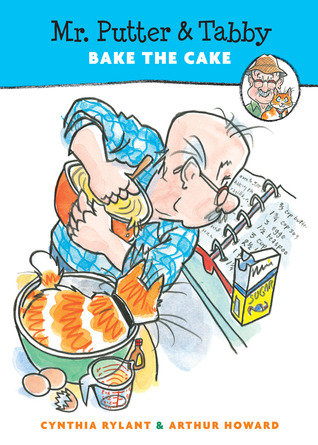 First sentence: It was wintertime. Mr. Putter and his fine cat, Tabby, sat at their window every night to watch the snow come down.

Premise/plot: Mr. Putter and Tabby Bake the Cake is the third book in the early chapter series by Cynthia Rylant. In the first chapter, readers learn that Mr. Putter and Tabby LOVE Christmas. They love giving Christmas presents. But Mr. Putter isn't sure what to give his neighbor, Mrs. Teaberry, for Christmas. She loves fruitcake. Mr. Putter doesn't understand why a person would love fruitcake, would even like fruitcake. Cakes should not be able to break your toes. He decides he will bake her a cake for Christmas. In the second chapter, readers learn of all the obstacles standing in the way. "The cake was not a cinch. In the first place, Mr. Putter did not know how to bake a cake. He could bake instant muffins. He could bake instant popovers. But he had never baked a cake. He didn't know how. In the second place, Mr. Putter had no pans. He had muffin pans. He had popover pans. But he had no cake pans. If he baked a cake, it would have to be in a shoe. Or maybe in a flowerpot. Or even in a hat." The third obstacle: no cookbook. In the third chapter, Mr. Putter finds a solution to his problem. He will learn to bake a cake from Mary Sue. Mary Sue doesn't entirely seem trustworthy. She sells him $100 worth of STUFF though. "She sold Mr. Putter seven bowls. She sold Mr. Putter three sifters. She sold Mr. Putter ten spoons, five cups, two spatulas, a roll of waxed paper, and a Christmas tree pan. Then she sold him an Easy Baker cookbook and sent him out the door. Mr. Putter had spent one hundred dollars. And he still didn't have any flour." In the fourth and final chapter, Mr. Putter and Tabby get ready to bake. Will the cake turn out light and airy? Will Mrs. Teaberry enjoy the cake? Will this be a happy Christmas?

My thoughts: I definitely enjoyed this one. It was FUN. It was MERRY. I am continuing to love this series. The writing is just delightful. Rylant knows how to craft an entertaining story. There is a lot of characterization packed in as well--a lot of showing and not telling.
© 2017 Becky Laney of Young Readers
Posted by Becky at 7:30 AM