Milly and the Macy's Parade 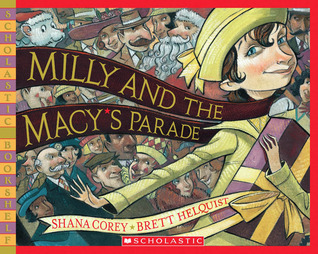 First sentence: It was 1924, Milly's first year in America, and all over New York City people were hustling and bustling about getting ready for the holidays.

Premise/plot: Milly's father works at Macy's. She notices that her father and some of the other immigrants are homesick. She goes to Mr. Macy himself and suggests that they should have a parade where they march and sing and dress up to remind people of the old world they've left behind. The parade is a success, and he decides they should make the parade an annual affair.

My thoughts: This origin story of the Macy's Thanksgiving Parade is almost entirely fictional. The first parade was in 1924, that much is true at least. But there is no Milly. And Mr. Macy was several decades in his grave by then. The book does emphasize that this "American parade" was based on several different cultural elements. It was a variety of immigrant groups blending together--working together--that birthed this American tradition.