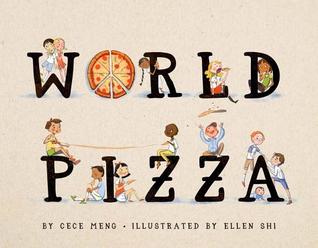 First sentence: The tall hill with the cherry trees and the soft grass for chairs was the best place to look for a wishing star. Mama found such a star, the first to be seen in more than one hundred years. It was not the brightest nor the biggest in the sky that night, but it was still a true wishing star. So Mama made her wish. "I wish for world peace-ah...ahh...ahh-CHOO!" said Mama.

Premise/plot: When Mama wishes for world peace, her sneeze interrupts the wish. Her wish does come true, but not exactly in the way she expects. Will a pizza for every family usher in world peace?!

I found the book to have a ridiculous premise. The foundation of it is shaky at best. Can families even agree among themselves on pizza? For example, there's the question of crust: thin, hand-tossed, deep dish. Then there's the question of toppings. It can be difficult for even two people to agree on toppings--let alone a whole family. How many families have picky eaters?!

In this book, to be fair, no person is given a choice in the pizza. The pizza falls from the sky, lands where it wills, and it is what it is. You don't have a choice in toppings or crust. You also don't have a say as to if the pizza falls on you directly--or the ground, a car, a tree. I don't know about you--but even if I could eat pizza (I can't) I wouldn't eat one that had landed on the grass, on the sidewalk, on the street, on a car, on a bush or tree, on anything really. I don't think the "five second rule" would really come into play as far as I'm concerned.

I'm imagining a pizza landing right in front of me. And it would not make me happy if I couldn't eat it. The universe would be teasing me. Why couldn't the star deliver pizzas world-wide in a box?!

Also, keeping it practical. If world peace is established on full bellies, what happens when those full bellies are empty. If there's one thing you can rely on--it's the fact that no matter how much you stuff yourself, you will be hungry again. Or HONgry. I couldn't think of a shallower foundation for world peace than a full belly.

One last note, one of my favorite Garfield episodes features Garfield trying to force the Buddy Bears to fight. (Oh, we are the buddy bears we always get along...) He breaks these friends apart with pizza.