The Bippolo Seed And Other Lost Stories 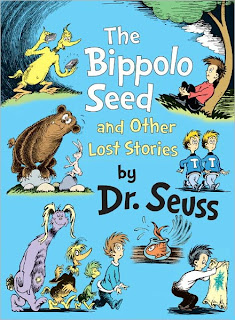 I love Dr. Seuss. I do. And I was oh-so-happy to discover that Random House was publishing a new collection of Dr. Seuss stories. These seven 'lost' stories were originally published in magazines in the early 1950s.

The seven stories are:

The Bippolo Seed
The Rabbit, the Bear, and the Zinniga-Zanniga
Gustav, the Goldfish
Tadd and Todd
Steak for Supper
The Strange Shirt Spot
The Great Henry McBride

I enjoyed almost all of these stories.

The Bippolo Seed is about greed. A duck finds a magical seed. He's told to make a wish and plant the seed. But before he can make a wish--a practical, simple wish--a cat stops him. He must want more than just a week's worth of food. How unimaginative a wish is that after all? So with a little encouragement, this duck named McKluck gets a little out of control.

The Rabbit, The Bear, and the Zinniga-Zanniga is about a rabbit NOT wanting to become the bear's dinner. The rabbit has to think quickly to make sure that does not happen! But it's not enough for the rabbit to manage an escape, it has to be done in style!

Gustav, The Goldfish. It didn't take me long to recognize that this was FISH OUT OF WATER. What I didn't know was that this story inspired it. And that the author of A Fish Out of Water was Dr. Seuss's first wife, Helen Palmer. Seuss' story rhymed, Palmer's didn't. But essentially the same story about a boy and a fish and the importance of following directions very very carefully!

Tadd and Todd is a story about twins. One of the twins just loves to look exactly like his brother. The other twin isn't quite so pleased. In fact one of the brothers will do just about anything to be different. But that isn't always easy. I liked this one because it used the phrase: "which one was what one, and what one was who." It is an outlandish tale, of course. And it just gets more and more elaborate...what one brother will do to stand out from his brother. So it's enjoyable.

Steak for Supper introduces some fun animal-like characters--much like Wocket in My Pocket. It introduces the Ikka, the Gritch, the Grickle, the Nupper, and the Wild Wheef. The moral of this one is don't brag too much...you see, the little boy was going around saying that he had steak to eat every Saturday night. Well, one Saturday, these fanciful creatures decide to join him because they want steak too! Of course, the little boy doesn't know how he'll ever explain all this to his parents...

The Strange Shirt Spot is a very interesting story in that it introduces the idea of a spot that just WON'T go away. It is the inspiration, if inspiration is the right word, for the pink cat ring in The Cat in the Hat Comes Back. The spot even gets on some of the same things.

The Great Henry McBride celebrates imagination and daydreaming. In this case a little boy dreams about what he wants to be when he grows up...