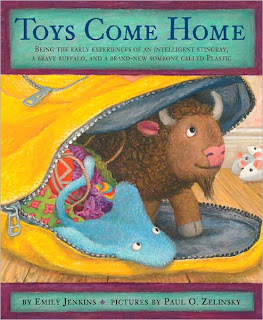 StingRay has missed the birthday party. She didn't mean to. It was her first party, first party ever in the world to be invited to--and she missed it. She didn't even know she was missing it. She didn't know anything about the party until now, when it is already over.

The full title of this delightful prequel is "Being the Early Experiences of An Intelligent Stingray, A Brave Buffalo, and a Brand-New Someone Called Plastic." Of course, if you've read Toys Go Out and Toy Dance Party, you know all about Stingray, Lumphy, and Plastic. But what you may not know is how they all three came to belong to the Little Girl.

I love the premise of this one. I do. I definitely wanted more stories about these three friends. And these 'early' stories are just perfect!!! The six stories:

In Which There Is Nowhere Nice To Sleep
The Story of an Ear
What Happened to Bobby Dot
You Can Puke On Me
In Which Lumphy is Brave With a Tuna Casserole
The Arrival of Plastic, and Also The Reason We Are Here

The main character of this one happens to be Stingray. In the first story, we learn of how she arrived too late for the little girl's birthday party, but just in time to arrive on the ACTUAL birthday. As a new toy, she hasn't really found her place in the bedroom just yet. She's getting acquainted with the other toys, the other stuffed animals. She's learning--observing--everything.

Two new characters introduced are Sheep (was Sheep in the other two books? Have I forgotten?) and Bobby Dot. There's a good reason why Bobby Dot, the walrus, is NOT in the later books. At first, I wasn't exactly sure why Bobby Dot's story is included in Toys Come Home. Then I thought about it and thought about it some more. Things like that just happen. Not to be overly dramatic, but that's just a toy's life. And I definitely liked how that story is REDEEMED with a very familiar character, Lumphy.

It was so much fun to see the Little Girl shopping. There's just something oh-so-true about these books. In this one, one of the things I loved was HOW very individual the toys were. How when she was shopping she just knew, she just could tell, which (stuffed) ANIMAL was for her. Because the toys are so very-very real to her. Maybe not every reader can relate. But I can!!!

So some of the stories are just good fun, and one or two are slightly more serious. (Though not as tragically sentimental as say The Velveteen Rabbit).