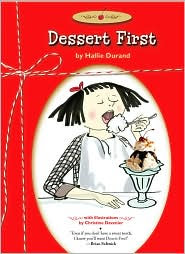 I don't know if Mrs. Howdy Doody is her real God-given name or not, but on the very first day of third grade, our teacher told us to call her that She also told us, on that very first day, to march to our own drummers.

This book was satisfying. Dessert Schneider, the narrator, just charmed me through and through. It's one of those books that I wished I could have read as a kid. Because I know that while I liked it now as an adult, I would have been crazy about it as a kid. I'm not sure exactly why. Sure it is a great book that is passionate about food--about desserts to be exact--but I think it goes beyond that. I think it is Dessert herself. I can see myself in her. She's so perfectly imperfect. So lovably flawed. She doesn't always do the right thing, say the right thing. She makes mistakes. And, on a good day, she recognizes that and tries to fix it. I like that she's unique. That she has her own way of seeing the world.

I don't know that I can pinpoint exactly what this one is about. It sounds silly to say it's about an 8 year old learning some important life lessons. Because while Dessert does learn from some of her mistakes, the book isn't about her learning from mistakes. (In an oh-so-didactic way). It's about Dessert, about her family, about her teacher, about a school project, about life itself.

The project is asking the students to give up something that they love for two weeks. Each day they succeed, their sponsor(s) give a designated amount of money. ($2 a day for not doing whatever it is, for example.) Dessert struggles with what to give up. Because while she thinks the prize is good (they're raising money for something for the playground I believe), she doesn't want to give up something too big (like desserts), but she can't be too obvious about giving up something too small. (Like mayonnaise.) What's a girl to do?

© Becky Laney of Young Readers
Posted by Becky at 9:10 AM