Cat On The Mat Is Flat 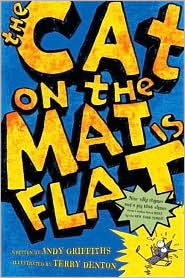 Griffiths, Andy. 2007. Cat On The Mat Is Flat. Illustrated by Terry Denton. Feiwel and Friends. 167 pages.

This early reader is heavily illustrated. So don't be intimidated by its length! It's a fun little collection of stories--rhyming stories--that are just about right. Mostly. I read The Big Fat Cow That Goes Kapow first. So I was comparing this earlier effort with his newest effort. But I *still* think this one is a lot of fun. There are nine little rhyming stories in all. Some stories have more substance than others. But all are simple and meant to appeal to a young audience.

My personal favorite is Bill and Phil and the Very Big Hill. I just thought that one was hilarious.

Here's how it starts out:

So Bill and Phil rolled down the hill.

Of course that is just the start of this story. With nine stories, there is something for everyone, I think. You may not love all of the stories. But there will probably be a few--at least--that you think work.

© Becky Laney of Young Readers
Posted by Becky at 10:12 AM