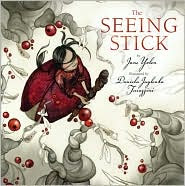 I just have to say that I was amazed by the illustrations. I mean Jane Yolen is still Jane Yolen. But wow, these illustrations! The book would not have been anywhere close to the same without these pictures! Here's how it opens:

Once in the ancient walled citadel of Peking there lived an emperor who had only one daughter, and her name was Hwei Ming. Now this daughter had carved ivory combs to smooth back her long black hair. Her tiny feet were encased in embroidered slippers, and her robes were woven of the finest silks. But rather than making her happy, such possessions made her sad. For Hwei Ming was blind, and all the beautiful handcrafts in the kingdom brought her no pleasure at all. Her father was also sad that his only daughter was blind, but he could not cry for her. He was the emperor after all, and had given up weeping over such things when he ascended the throne. Yet still he had hope that one day Hwei Ming might be able to see. So he resolved that if someone could help her, such a person would be rewarded with a fortune in jewels.

Can Hwei Ming be made to see? Is there a miracle worker out there for her? What can one old man with a wooden stick--even if he calls it a seeing stick--give to the greatest in the land?

As the story unfolds, we go from black and white (and gray) to these incredibly vivid, bright, majestic, rich color spreads. The change is subtle. It doesn't happen all at once, it starts with small shadings here and there. But before you know it the story (through the illustrations) is jumping off the page.

I enjoyed this one.

© Becky Laney of Young Readers
Posted by Becky at 2:24 PM