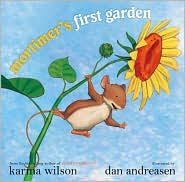 This one is being reviewed slightly out of season. A book about spring time just weeks before the start of fall? Well, that happens sometimes. And I think better late than never. I really, really loved this one. It stars Mortimer the Mouse. And according to the jacket flap, Mortimer is a character first introduced in Mortimer's Christmas Manger. I haven't read that one. (Though if Mortimer is as Mortimer-ish there as he is here, then it's something I really need to get my hands on!)

Little Mortimer Mouse looked outside. "Brown, brown, brown," he squeaked. "Nothing but brown! Too dull, too drab, too dreary!" Mortimer longed to see something green. Anything green.

As the title suggests, this one is about Mortimer planting a garden. To be truthful, it isn't so much a whole garden as it is one tiny seed. Mortimer has decided--after eavesdropping on his humans--to plant one sunflower seed. He's not always sure that this was a good idea. But he's hopeful that something good might come of it. If he's patient enough. But it sure is hard to be patient sometimes!

What should you know about this one? Well, Mortimer is a God-loving little mouse. So if pictures of a mouse praying to God and being thankful for God's blessings offends you, then this might not be the book for you. I personally, thought the book was sweet and charming.

© Becky Laney of Young Readers
Posted by Becky at 1:26 PM