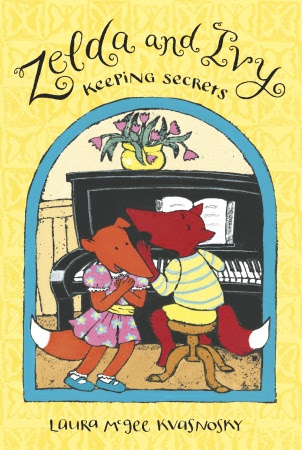 These foxy sisters are back for another adventure. Sibling rivalry, fox style. Zelda is the older; Ivy the younger. In the first chapter, the reader learns that Ivy is not so good at keeping secrets. Zelda sets up Ivy and her friend, Eugene, by telling them both a secret. It's all good fun. Surprising? Not really. Secrets are hard to keep sometimes. In the second chapter, Zelda decides to prank Ivy. Ivy did start off teasing Zelda, so does she deserve it? Maybe, maybe not. Read and see for yourself if Zelda's prank goes according to her plan. In the third chapter, we see how differences of opinion can be resolved--Ivy and Eugene want to be quiet; Zelda wants to be loud, loud, loud. Who will have the last laugh?

© Becky Laney of Young Readers
Posted by Becky at 11:51 AM