Have You Ever Seen A Duck in A Raincoat? 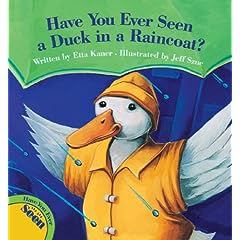 I said the questions seem silly. But really, when you're curious, you're curious. And I admit--to this day even--asking some seemingly bizarre or silly questions of my parents. The book is about how humans and animals are different.

The text is informative and straightforward. No problems there.

Though you can't tell from the cover, Have You Ever Seen a Duck In A Raincoat features some of the worst illustrations I've ever seen in a book--published by a real publisher at least. It's not that the illustrator can't draw animals--he can; he does. It's that his human characters--this boy and girl--are so poorly drawn. (That's not even including the embarrassing shot of a grown boy riding a tricycle.)

© Becky Laney of Young Readers
Posted by Becky at 11:43 AM