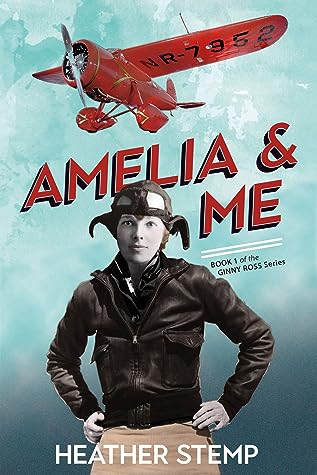 First sentence: EVEN IN AUGUST the early morning in Newfoundland was cold. I snuggled under my quilt until the grandfather clock in the parlour struck three. Then I swung my legs over the side of the bed and reached into the warmth under the covers for my clothes. I wiggled out of my nightgown and quickly pulled on my navy dress and red sweater.

Premise/plot: Amelia and Me is a historical middle grade novel based on the author's own family. The main character, Ginny, is the author's aunt. The novel opens in 1931 and is set roughly 1931/1932 during the Great Depression. Our young heroine is obsessed with airplanes and wants more than anything to take flying lessons and fly herself. Yes, it's awesome to watch other people fly planes, to keep up with all the news stories and headlines as pilots break one record after another after another. But she wants to FLY herself. The problem? She's young, still in school, and her mother is dead set against it. So what's a girl to do???? Well, if you are Ginny Ross you write the world's most famous woman pilot, Amelia Earhart, and get her advice....

My thoughts: I really loved seeing the photographs at the end of the book. I loved knowing that these characters were real people--even if this is historical fiction and should not be considered strictly nonfiction.

I went through a period where I read ANYTHING I could get my hands on about Amelia Earhart. Not because I was fascinated with flying or wanted to fly myself, but, because it was my sister's research project and I just happened to read all of her library books. Once I read one or two, well, the rest just seemed to come naturally. I think part of the appeal to me was the mystery surrounding her final flight. Of course, this book is set a good many years before that tragic ending.

I am curious how many books will be published telling Ginny Ross' story. I am curious, for example, to see if Ginny Ross became a flyer and perhaps flew for the WASP during the second world war??? Of course I don't know the answer to that question!