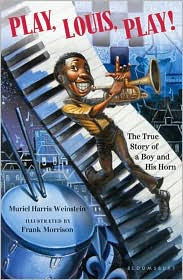 There isn't a jazzman in New Orleans who hasn't tapped my brain about Louis Armstrong. They talk to me as if sugar's sprinkled on their tongue. "Hey, you knew Louis like no one else. What's the pitch, the real story?" These jazzmen know I know. I ought to. I was Little Louis' horn, the first horn he ever played.

I'm not sure a book narrated by a horn should have the word true in the title. Though that could be just me, I suppose. I love Louis Armstrong. I do. I love listening to his music. I love reading about him, too. I've read a few picture books and chapter books--some nonfiction, some fiction. I think it's wonderful that there is such a rich amount of books about jazz and jazz musicians for young readers. (Picture books, poetry books, chapter books, etc.)

Play, Louis, Play is reader-friendly, I think. The book covers the earliest years of his life--his childhood to the beginning of his success. It covers the good times and the bad times. And in his childhood, there were plenty of not-so-good times. Hunger, poverty, misdirection. But music saved Louis Armstrong in more ways than one. While I wish--I really wish--it had been told by a human narrator, the facts remain the facts. The story is interesting despite the fact that you have to suspend your disbelief from cover to cover.

Readers might also be interested in Eric Kimmel's A Horn for Louis. And I really enjoyed The Louis Armstrong You Never Knew by James Lincoln Collier.