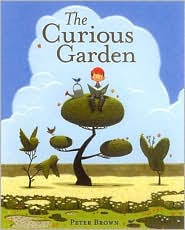 There once was a city without gardens or trees or greenery of any kind. Most people spent their time indoors. As you can imagine, it was a very dreary place.
However, there was one boy who loved being outside. Even on drizzly days, while everyone else stayed inside, you could always find Liam happily splashing through his neighborhood.
It was on one such morning that Liam made several surprising discoveries.

Can a garden thrive in the city? Can a garden grow in unforgotten places and spaces? Can a little boy start a love-nature movement and change the landscape of an entire city? You might enjoy reading Peter Brown's The Curious Garden. It is about a little boy who "discovers" wildflowers and other plants growing on an abandoned railroad track. He decides that he wants to make this place his own--he wants to be the gardener, the caretaker, of this little green space. Especially since it's such a contrast to the drab gray environment of the city. The book follows this "garden" through several seasons.

I was not a big fan of this one. But I think that could be just me.