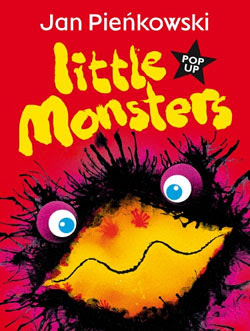 Originally published in 1981, Little Monsters is a monster-filled pop-up book. You may (or may not) remember Jan Pienkowski's other pop-up book, Dinner Time, which I reviewed several months ago. (See that review here.) I liked both books. I can appreciate the work that went into creating the intricate pop-ups. But in the case of this book, there were two few pop-ups. Five pop-up spreads. Then again, I noticed that the suggested retail price is only $7. So maybe it's not too few after all...considering.

I liked it. I didn't love it. But I did like it. I especially liked the little monster who is very rude.

© Becky Laney of Young Readers
Posted by Becky at 8:58 AM