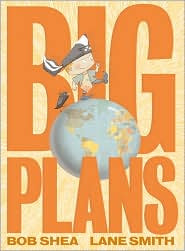 High hopes. High hopes, I say! I had high hopes for this book written by Bob Shea (author of New Socks, one of my favorite favorite picture books last year), but I was slightly disappointed with this offering. Perhaps my hopes were too high. That happens sometimes, you know.

The premise of this one is--and no doubt about it--fun. A young boy is being punished. We're never quite told what his exact crime is this time. (Though we can easily guess that this is NOT the little boy you want in your classroom. In fact, he's the little boy whose parents you'd be needing to set up conferences with, and crossing your fingers that they're aware that their child is in fact a bit of a brat.) He is a boy with ambition, true, and dreams of world domination. A tyrant. A dictator. 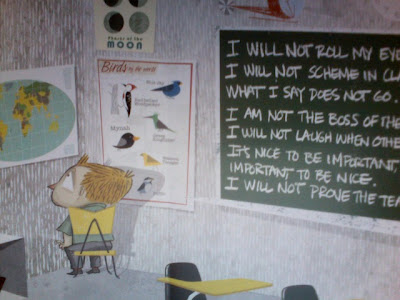 This is how it begins,

Soon the entire world will know of my big plans.
Plans so big I'll need Dad's shiniest tie and fanciest shoes.
Then I'll climb atop the highest hill in town and shout...
"I got Big Plans! BIG PLANS, I Say!"
On the way down, I'll meet a mynah bird.
"Hey Bird, have you heard?
I got me some big plans!
BIG PLANS, I say."
"What's it gonna be, bird?
In or out?"
"I'm in!" says the mynah bird.
"Okay, then!
Onward, bird!"

Anyway, the book has its moments. It's got some fun moments, funny moments, silly moments. And I think this wanting of power and control and authority is universal in many ways. But I couldn't quite get past how scheming and bratty this kid is. I really am not liking this kid. Maybe as a grown-up I don't quite get the appeal of being a brat. Or the appeal of glorifying bratty behavior to kid readers. Who knows. Maybe kids will love this one more than I did. It's not that I didn't like it. Just that I didn't love it.

Other reviews: Pink Me, Imperfect Parent, The Excelsior File,

© Becky Laney of Young Readers
Posted by Becky at 9:07 AM