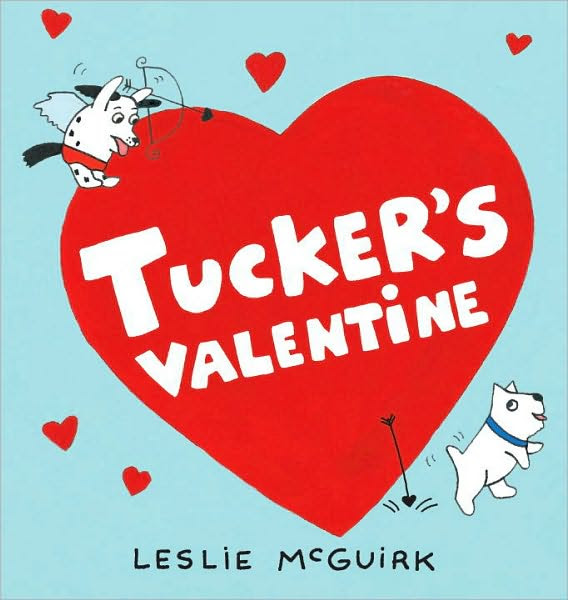 Today is Valentine's Day!
Tucker's owner tells him that
Valentine's Day is all about love.
There are lots of things that Tucker loves:
his dog food, his Frisbee, his favorite spot on the couch,
laundry on the floor, his stuffed piggy, and bubbles from a jar.

Tucker the dog stars in a couple holiday adventures: Lucky Tucker, Tucker's Spooky Halloween, Ho, Ho, Ho Tucker! And I believe he may star in a few other books as well--according to Barnes & Noble--Tucker Flips, Tucker Off His Rocker, and Tucker Over the Top.

This adventure is in board book, but I'm not exactly sure why. Because the audience doesn't match (in my opinion) the format. I think it's a bit too wordy for toddlers. And I think the humor is a little too much for toddlers.

In this adventure, Cupid (a dog with wings dressed in red underwear) tries his best to shoot love's arrow at Tucker. The book chronicles each of Cupid's attempts--his failures. I found it odd to say the least. I think the book is funny--at moments--for a slightly older audience. It might make a good read aloud for an older audience. But I'm not sure it's a good fit as it is.

I did like the ending. I thought that was well done. But overall, this one didn't quite work for me.