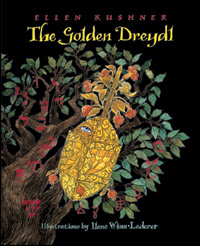 Before it was a book, it was a musical performance. It is performed live, and there are also radio productions of it. And a CD.

"The Golden Dreydl" is an award-winning family entertainment featuring the music of Peter Ilyich Tchaikovsky, as interpreted by Shirim Klezmer Orchestra, with original story and narration by Ellen Kushner. Together, they have created a brand-new retelling of an old tale: Sara is a little girl with a problem: she hates the annual family Chanukah party! But when a mysterious party guest gives her the gift of a golden dreydl, Sara is catapulted into a magical world of demons and fools, sorcerers and sages.

Knowing that it is a "Jewish" interpretation of The Nutcracker helps when you're reading the book. You know in some ways what to expect.

Sara is a young girl who is not excited about Chanukah. She'd much rather be celebrating just like her friends--with Christmas trees and such. But Sara is on her way to a Chanukah celebration she'll never forget. A most magical time is about to be had--at least for Sara. And it all starts with a gift that is not what it seems. A gift that comes to life. A golden dreydl.

I really enjoyed this one.

© Becky Laney of Young Readers
Posted by Becky at 5:53 PM