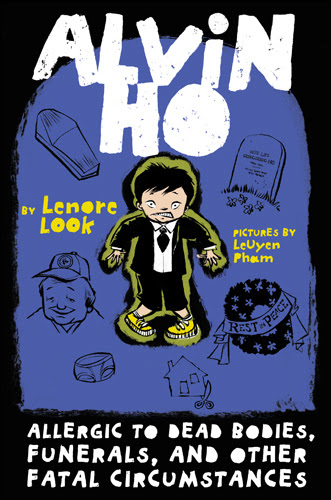 Call me Alvin Ho. I was born scared and I am still scared. And this is my book of scary stories.

In this Alvin Ho book, Alvin gets in a horrible, terrible predicament. The truth of the matter is that his grandfather's best friend, Charlie, has died. In a rare moment of bravery he volunteers to go with his grandfather to the funeral. Almost from that very second he regrets it. But his grandfather seems so genuinely touched, so very pleased at Alvin's response, that he is too scared to say he's scared. The next day, in another rare moment--on the bus, I believe--he blurts out that he's going to a funeral and going to see a dead body. He never once says who. At least not that I can recall. But everyone assumes that his grandfather has died. And they tell the teacher who tells the principal who tells just about every other person at the school. So in a matter of hours, everyone has come together for Alvin and wants to honor his grandfather. So much so that they want to have a memorial service at the school the next day. Poor, poor couldn't-speak-up-at-school-to-save-his-life Alvin, he finds himself unable to say hey wait, he's not dead!

So the novel is about that big misunderstanding...and about his fears of losing someone he loves--like his grandfather, like his father--to death.

I didn't really like this one. Not when comparing it with earlier books in the series. The third and fourth books in the series just haven't excited me. It's not even that this book is 'bad' or inappropriate. It's just that I'm not sure Alvin Ho is as charming as he used to be. To me.