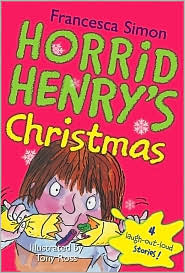 One of the great discoveries of the year--at least as far as chapter books are concerned--is a fun little series by Francesca Simon. Horrid Henry. How horrid is Henry? Very, very horrid. A role model, he isn't...and yet...there is something (at least to me) wonderfully charming about his being so horrid. The books are funny. Will everyone appreciate Horrid Henry's humor? No. Will some readers find it a bit too much to take? Probably. But I find the books fun. And I think they'd be great to read aloud.

In Horrid Henry's Christmas, we get four stories--all set within a span of days leading up to Christmas--where Henry is well, horrid, as usual. In the first story, "Horrid Henry's Christmas Play," we see Henry upset about not getting a good role in the school play. Will he find the way to steal the show anyway? In the second story, "Horrid Henry's Christmas Presents", Henry tries to save his money by making (and making do). He doesn't want to spend his money on others, you see, so he's trying to do gift-giving with the least amount of effort. Do you think his plan will backfire? Do you think his family will be able to figure that one out? In the third story, we see Horrid Henry trying to "catch" Santa. It's a sure-fired way (in my opinion) on how to get coal in your stocking. Horrid Henry is so very naughty! Though I must admit his conversation with chocolate had me giggling. In the fourth, it is finally Christmas. What surprises does the day have for Horrid Henry and his family? Will he behave himself? What do you think?!

I enjoyed this one. It was a fun holiday read.

© Becky Laney of Young Readers
Posted by Becky at 8:10 AM